The Wuhan coronavirus, which at last count has killed more than 80 people and infected more than 2,800 in China, is about to make fixed mortgage rates cheaper for Canadians.

The new coronavirus is spreading fear throughout financial markets, conjuring memories of the 2003 SARS epidemic that killed 774 and knocked at least one-10th of a percentage point off Canada’s GDP.

The present contagion creates yet another risk for Canada’s economy. Investors worry it’ll disrupt Asian trade and hurt confidence, spending and oil prices. That would create deflationary pressure, and inflation expectations are the No. 1 driver of interest rates.

The timing for a potential pandemic is never good, but this news is particularly ill-timed. It comes as fears of an economic slowdown intensified after last Wednesday’s somewhat gloomy Bank of Canada statement.

The impact of the Wuhan coronavirus on mortgage rates could potentially last until reports of new cases slow significantly. In the case of SARS, that took roughly four months.

Canada’s five-year government bond yield, and five-year posted mortgage rate, fell more than one percentage point during the peak of the SARS outbreak. Of course, there were other rate drivers at the time, including a U.S. Federal Reserve rate cut in June, 2003.

It’s premature to try estimating the rate impact at this point. Some expect this outbreak to be shorter and less impactful to Canada given advances in containment. Other experts speculate it could be even worse than SARS.

The good news is that the effect of all this will be temporary. We just don’t know how long temporary is. Markets often overreact to outbreaks and then recover within months. But this situation is largely unquantifiable at this point. So, the scare should at least be enough to knock down fixed mortgage rates ahead of the important spring mortgage market. 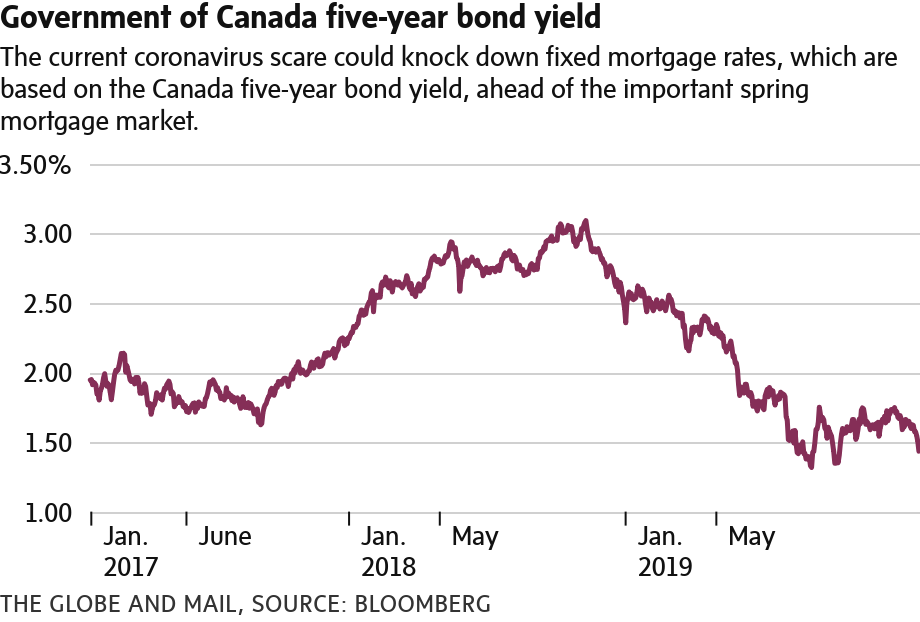 On that note, Canada’s spring market could start early this year given recent price gains and people’s fear of missing out. And lower rates could further incite home buyer interest. That demand will be somewhat tempered, however, if banks continue refusing to drop the federal stress-test rate below 5.19 per cent.

Either way, the new coronavirus is going to put fixed mortgage rates on sale … again. Today’s lowest widely available full-featured five-year fixed rate is 2.79 per cent. That could easily fall closer to 2.5 per cent next month if the downtrend in bond yields persists.

This news will have many confidently predicting that the four-month uptrend in mortgage rates, which ended in December, will prove to be a longer-term top. The odds are good that it won’t be breached for months to come. That’ll give mortgage shoppers more confidence to choose variable and shorter fixed terms, particularly if lenders launch specials on them, which they often do in the spring.

On the housing front, the risk that higher rates disrupt the rebound in home prices now seems low. And a global contagion may not depress prices either, depending on how many cases hit our shores. In 2003, amid the SARS scare, the average Canadian home price rose more than 9 per cent.

This potential confluence of bullish housing developments will probably have housing policy makers fearing re-inflation of Canada’s debt bubble. That’ll make this spring compelling to watch as the coronavirus spreads.

Source: The Globe and Mail