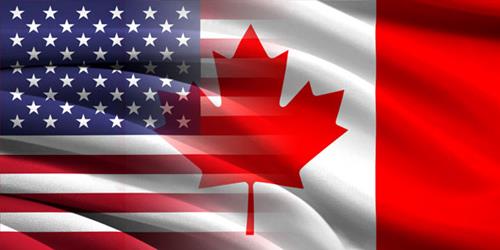 And for Canadians waiting for lower rates, those same global forces are on their way, and will likely force Bank of Canada Governor Stephen Poloz to follow suit.

Despite the fact that the quarter point cut was widely expected, the move had an immediate effect on the Canadian dollar which fell promptly after Powell's announcement.

While Powell said shrinking industrial activity justified the cut, he insisted that he and his advisers expect the economy to continue to grow, and predicted there would likely be no more interest rate cuts this year.

Markets — which have been predicting a series of cuts and, until recently, expected a larger half point cut — tumbled on the news.

After repeated attacks on Powell and the central bank, whom Trump recently described as "boneheads," it was hardly surprising that the president expressed his unhappiness with the Fed chair's mild rate cut.

"Jay Powell and the Federal Reserve Fail Again. No 'guts,' no sense, no vision!" tweeted the U.S. president.

Powell insisted that such insults were not going change the bank's outlook, and that despite the repeated attacks morale within the organization remains strong.

"I assure you that my colleagues and I will continue to conduct monetary policy without regard to political considerations," said Powell.

He said the bank's decision not to make the kind of deep cuts Trump has been demanding is because much of the economy remains robust.

"The consumer is spending at a healthy clip," said Powell. "The labour market is still strong."

Powell sees growth for 2019 and 2020 coming in at two per cent, which he described as "a good solid year," and the purpose of the two rate cuts this summer, he said, have been to keep the economic expansion alive.

"If you look at things that are happening in the economy, I personally see a high value in sustaining the expansion because we really are reaching, this positive economy is reaching, communities that haven't been reached in a long time," said Powell.

If that stimulus acts as intended, the economic boost is likely to work its way across the border into Canada, perhaps delaying the need for rate cuts here.

"Global capital markets are highly integrated and our long rates are definitely pulled down by the very, very low rates that are abroad," said Powell. Those low overseas rates are one of the reasons for the inverted yield curve — a potential recessionary indicator from the bond market — and are a sign that parts of the global economy are on the rocks, he said.

The Bank of Canada always insists it is not directly affected by U.S. interest policy moves, says Scott Aquanno, a political economist at Ontario Tech University, in Oshawa, Ont., who studies central banking.

But just as Powell fears possible contagion from the struggling economies of China and Europe, Canada will also feel the effects of U.S. moves.

"The domestic conditions that the Bank of Canada references when they say they are going to act on their own terms are set, in many respects, by what the Federal Reserve does," said Aquanno. And that means lower rates are coming to Canada too, he said.

"It won't act immediately because these kinds of things take a little while to trickle through the economy and to play out, but this does indicate … that the long-term trajectory for the Bank of Canada is a rate cut not a rate increase."

At Wednesday's news conference Powell was asked about this week's credit crunch in short-term money, in what is called the repo market, when a shortage of lenders in the market for overnight money pushed rates far above the central bank's interest rate range, indicating the Fed had been caught short.

Because something similar happened before the 2007-08 credit crunch that led to the Great Recession, online chatter worried this week's market jolt was a symptom of something worse. That was a view Powell was anxious to dispel.

"We don't see this as having any implication for the broader economy or for the economic outlook," Powell told reporters.

But when the central bank began its emergency lending this week, banks came cap in hand for $53 billion US on Tuesday and another $80 billion on Wednesday.

"That's $130-plus billion the banks have asked the Federal Reserve for, so that's not insignificant, and in many respects it's startling to feel like a mini, kind-of crisis within short-term funding markets," said Aquanno.

The Fed is expected to release another $75 billion today in an attempt to steady the market, and Aquanno says it is crucial that they do for not just the U.S. but the Canadian and the global market.

"Once the Fed loses the capacity, or is perceived to have lost capacity to manage short-term rates, then that introduces tremendous volatility into the system because the Fed remains the global central bank, even more so that it did 15 years ago."